The idea of organizing a series of workshops '3in1' is due to Zdzisław Skupień. The first meeting was organized in November 1991 by Zdzisław in Cracow. In this very first workshop only 6 persons from Poland and Slovakia have participated, but several new papers have been originated and the collaboration has consolidated. Zdzisław was also the main organizer of the next 15 workshops '3in1' (the complete history of these meetings may be found on the www page http://www.wms.agh.edu.pl/zewn.php?adres=3).

The 17th '3in1' (November 6-9 2008 in Krynica) was organized to celebrate the 70th anniversary of Zdzisław Skupień. 73 participants from many countries came to felicitate the Jubilee, also by giving talks during the workshop.

For the graph theory in Cracow Zdzisław Skupień is the most important person. He is the author of 150 scientific papers, mainly on graphs, which were cited 250 times (his Hirsch index is equal to 8 at the moment). He participated in about 170 international conferences with talks. The graph theory is not the only field of scientifical interests of Skupień. He worked also on optimization, algorithms, number theory, discrete and convex geometry.

As quite young but very promising mathematician he became in 1970 the holder of the chair of Discrete Mathematics1 at AGH University of Science and Technology in Cracow. The scientifical activities were always the most important for Zdzisław Skupień, he remained however almost 40 years the holder of the chair and during many years the vice-manager of the Institute of Mathematics in AGH. He was the director of PhD thesis of 8 doctors of mathematics or informatics and he still is the scientific tutor of young researchers preparing their PhD thesis. 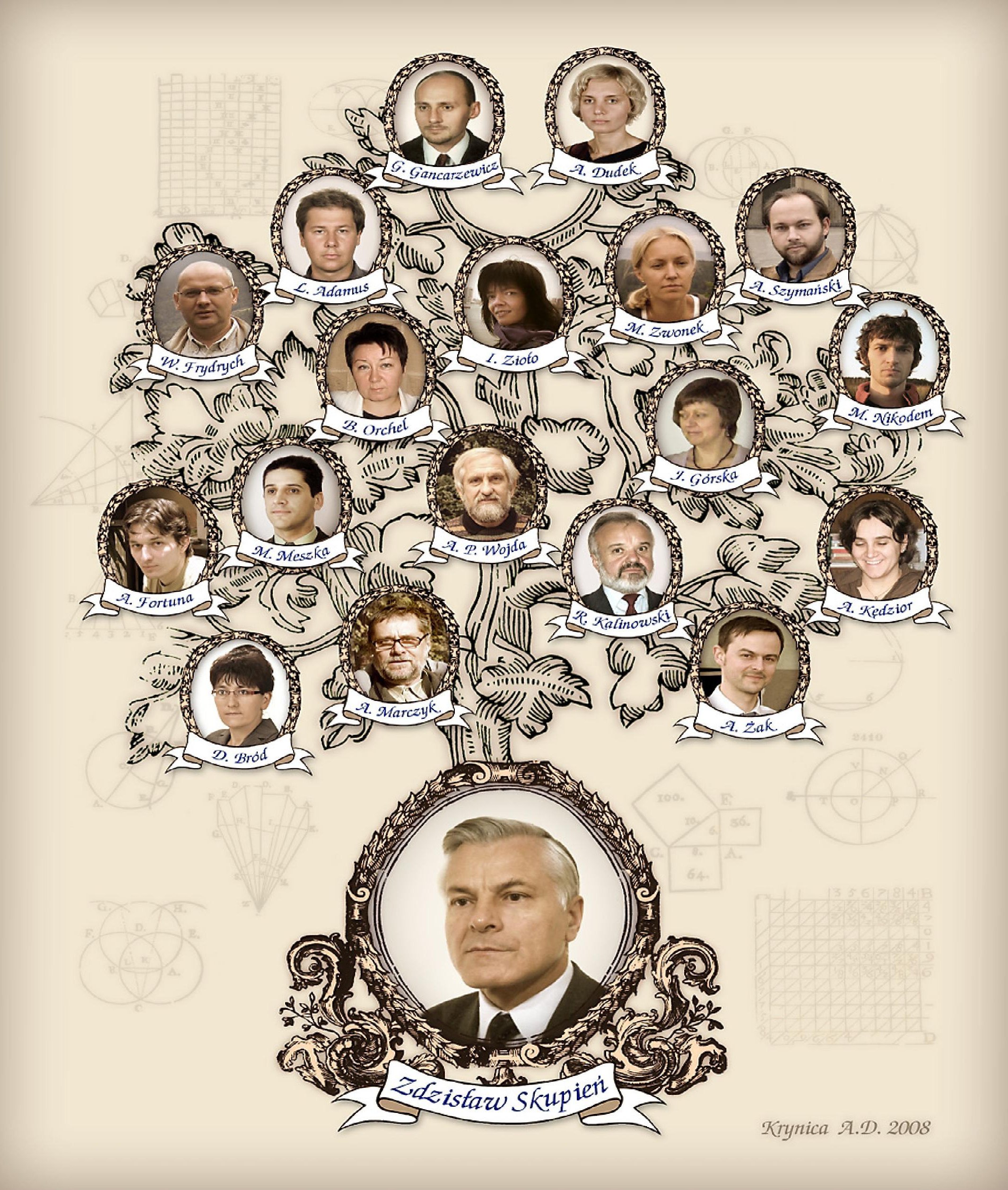 On the figure "Skupień Tree" is depicted2, in which all Zdzisław scientific children and grandchildren are shown (6 of them are the grandchildren and 4 are terminating their PhD thesis). Since the 1st January 2010 Zdzisław Skupień has been retired. Knowing him many years we may be sure that he will continue the researches and guiding young researchers.

1The name of the chair was not always Discrete Mathematics, but the discrete mathematics, mainly the theory of graphs, was the main subject of interest of Zdzisław Skupień and his scientific collaborators.

2This nice tree, prepared by Artur Szymański, does not show the exact scientific relationship of all shown persons. All the persons depicted are the scientific descendants of Zdzisław Skupień.